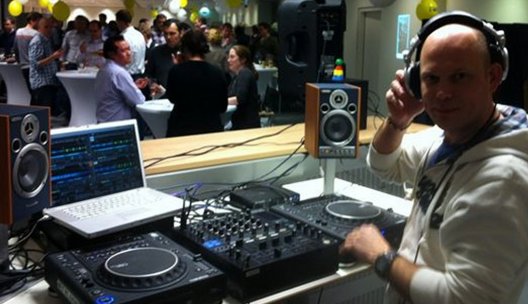 Bart Koopman is a DJ in the virtual world of Second Life, known under the avatar name Bart Kovacs. In the early 90's, Bart was active as a party DJ on a drive in show in his hometown Haarlem (The Netherlands).
Here he learned his appreciation for music extended far beyond listening, he could enjoy music most while mixing it getting instant feedback from the crowd. House music, has always been his passion, danceable tunes with a beat you can feel!

His career in IT didn't allow him to continue to DJ as much as he liked and he sort of stepped away from the idea. But in December 2006, Bart rediscovered his passion on Second Life, he could meet up with people from all over the world and share his music with them. One of his first DJ sets was broadcasted live to a car mechanic shop in Hawaii where the workers danced on the cars of joy.

Bart invested in a BEHRINGER BCD2000 MP3 mixer to allow him full control over his mixes. This way he could stream the music easily with high quality to all his devoted fans. He upgraded his DJ equipment later to a set of Reloop RMP-3 crossmedia players and a Pioneer DJM-800 mixer. His current favorite music style is dirty house (a combination of electro house and latin house with influences from British UK garage and grime), well known artists like DJ Jean, Jerry Ropero, Denis the Menace and the Swedish House Mafia give him inspiration for his sets.

Looking to meet me in person, join Second Life and search for Bart Kovacs.

For my DJ schedule, you can take look at the schedule of Mundo Beach, I usually have a set there every Friday and Saturday. More updates about my live sets can be gathered through my fan group in Second Life (DJ Bart's Fan Club), you can enroll for free to get notified before every set.